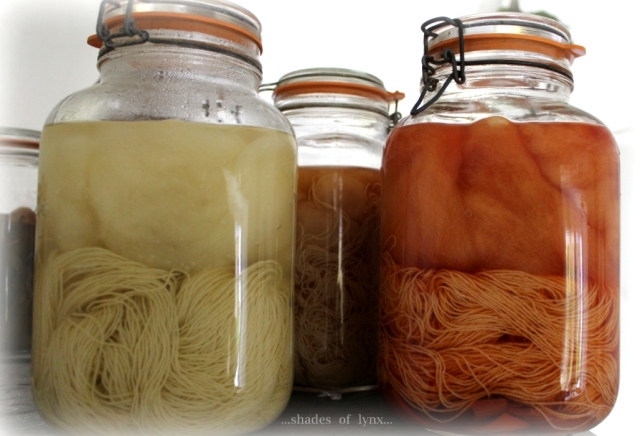 The last yellows and orange dyes of the autumn season 2016

It’s been quite some time since I’ve posted anything here, that’s because I’ve been working very hard this last few months with all kinds of dyeplants, experimenting a lot, working with a new/old fascinating fermentation technique, it is a different but similar workprocess than the way I used to dye, but with better results. In the process I’m writing all my dye-recipes down, making lots of notes, taking pictures and so on. I will post pictures very soon, to give my readers an idea on what I’m up to. In the meantime you can visit my  Instagram page. I will make all the results available as soon as I can, maybe in the form of an ebook or something else, I don’t know yet.  My idea is to work with plants all year long. I have the ambition to create some 50 different shades on wool and silk. So please be patient with me, as I want it to be as complete as it can be, I will write it down in English, which is not my native language, so that too will take longuer in the end.

One lemon and two oranges…

In the meantime I will post some other stuff, like this cranberry honey wine recipe for instance I always make a week or two before Christmas/Yule

one bottle (75 cl) of a good red wine – I use a homemade fermented fruit wine from elderberries and blackberries but a nice French wine is fine too.

The cranberry or large cranberry (Vaccinium macrocarpon) is a non-native plant in Europe, but they occur in the Netherlands on the Frisian Islands, also known as the Wadden Islands and in some other places in Friesland and Drenthe. Mostly found on Terschelling Island. They grow there because once upon a time, a barrel of cranberries washed up on the beach after a shipwreck around 1845. The Terschelling Cranberry Honey Wine is quite a popular recipe. (Terschellinger Cranberry honingwijn).

edit:  there are cranberries in Europa too (Vaccinium oxycoccos) It is known by the common names: small cranberry, bog cranberry or swamp cranberry. It is widespread throughout the cool temperate northern hemisphere, including northern Europe, northern Asia and northern North America . But the one I’m using in this particular recipe is the large cranberry (Vaccinium macrocarpon): the American cranberry, it is a North American species of cranberry. These are the ones who washed up on an Frisian island in the 19th century. I’m sure you can use the small cranberry too in this recipe, if you can find them in the wild, why not?

you can make some yourself with a blend of grated orange peel and/or lemon zest, cinnamon, ginger, star anise, black cardamom, cloves and vanilla bean for instance …

Bring the wine gently to the boil with the cranberries and the spices, simmer ten minutes until the berries pop open.

Let the mixture cool down at around 40 degrees C°, filter the wine in a mesh strainer and cloth, press the cranberries, add the honey, mix well and leave to cool.

and see you soon…